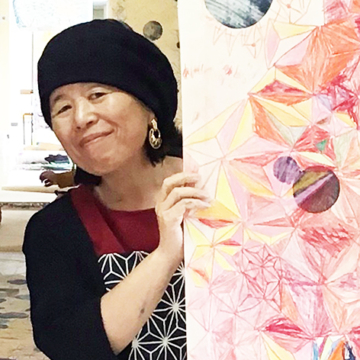 Emico Tsutsumi is a printmaker who incorporates musical notes and symbols as elements in her prints. With emphasis on workshops, like music sessions, that allow people to join in and resonate with each other, she uses materials and methods such as washi paper, lacquer, printing, and traditional patterns. Emico Tsutsumi held the “Envelope house” project (2016 Kids Design Award) within Japan and overseas after it was proposed following the Great East Japan Earthquake. The project began from a workshop that unfolds as participants trade their print works. She is also involved in place-making that develops from workshops centered on traditional hemp leaf patterns (Asanoha) and Kintsugi. Emico Tsutsumi feels that buying artworks is equal to joining a session with an artist of our era.