‘My use of the word “Showa” in the series’ title should not be misunderstood as my interest in exploiting feelings of nostalgia.
“Showa” to me means “the power to survive.”
What would the world look like if Japan’s Showa era (1926–1989) were still alive today? That’s the fantasy I allowed myself to indulge in three photobooks, the third and final entry having been published at the very end of Japan’s Heisei era (1989–2019).
The Heisei era—written with the two Japanese characters for “peace” and “to become“—truly has become what it promised—an era of peace and quiet. Thanks to the achievements of those who came before us, we in Japan were able to experience a safe period of relative stability.
At the same time, however, the undeniable truth is that behind the abundance of the Heisei era was a constant feeling of unease and uncertainty, a questioning whether “this is truly enough”, if “this is how things should go”. The era lacked any rite of passage to herald adulthood. I, too, was one of those who had to experience these feelings of uncertainty.
Here, we open a hole in the ground and bravely jump in, to arrive in a parallel world where Showa never ended and Heisei never happened.

I have some thoughts regarding today’s age of “compliance”. I believe that contradictions always exist in survival. In order to survive, there are grey zones that we cannot define as black or white. There are complexities in human beings that cannot be defined as “1” or “0” like computers.

For me, the grey zone is what makes us human, and that is exactly what I have been exploring in this trilogy. I find nobility in the indecorousness in my subjects — a form of aesthetics born from one’s strong faith.’

Born in Tokyo in 1975, Usui joined the Hakuhodo Photo Creative after graduating from the Department of Photography at Tokyo Polytechnic University in 1998 and became an independent photographer in 2013. He has exhibited his works at the exhibition “In & Out” at the Tokyo Metropolitan Museum of Photography (2003), the exhibition “Japan” at the Maymac Contemporary Art Center, France (2014), and Regards Croisés Japon-Provence at France Provence (2015), and participated in art fairs and exhibitions in Japan and abroad, including Gelatin Silver Session (2015, 2017). Winner of the 2006 APA Awards in the Advertising Work category, Usui has published several books including Macaroni Christian (Bijutsu Shuppansha), Showa 88, Showa 92, and Showa 96 (Zen Foto Gallery). Showa 92 was nominated for the 41st Kimura Ihei Award. In 2015 his first film Dalai Lama XIV, shot in close-up over six years, was released and shown throughout Japan, starting with Shibuya Eurospace.

Kazuyoshi Usui’s Showa trilogy is inspired by Philip K. Dick’s novel The Man in the High Castle for its depiction of a parallel reality. His Showa trilogy, which he has been working on for nearly 10 years, is based on places that give a hint of the Showa era, in which he grew up, but is now disappearing. Usui does not work on his own memory but imagines Showa as if the era had continued to the present. He depicts places typical of those to be found in underground or B movies, as well as the marginal people who live there in reality, in their minds, or the photographer’s imagination. The viewer wonders whether the image represents reality or some staged scene. His photographs question the real and the fake. He creates tragicomic, illusory fictions that seem like narratives but are more like legends in which the viewer can choose to create the story that develops in the interstices between the photographs. Usui was inspired by the Japanese painters Kiyokata Kaburagi and Settai Komura for their use of color, as well as by the cinematography of Kazuo Miyagawa (who filmed Rashomon of Kurosawa, winner of the Cannes film festival in 1951) and director John Waters. The concept of opposing beauties (Taikyoku no bi) also permeates the Showa trilogy. Both pairs of dichotomies like “indecency and the sublime,” “terror and the comical,” “Eastern beauty and Western beauty,” and “Life and Death” are embedded in his images. Usui studied under the pioneering photographer Hosoe Eikoh. The influence of Hosoe is visible in Usui’s black and white photographic work, such as Macaroni Christian. Usui originally wanted to become a filmmaker but turned to photography as soon as he started practicing it.

‘In my trilogy, I followed the smell of humanity, that almost repugnant odor, with the camera as my tool. I relied on my own sense of smell; I was led to encounter and photograph all these people and places, and at times I could recreate the stories I felt in the places I visited.

Using photography, a contradictory medium that weaves truths and lies, I tried to capture the heat emitted when people’s projected images and their true selves clash and grind. Perhaps I did it to fill in the gaps of my own dissatisfaction with the Heisei era.

Even if Japan—bleached, sterilized—emits much less of that human smell these days, I will still continue to hunt after it with my camera.’ 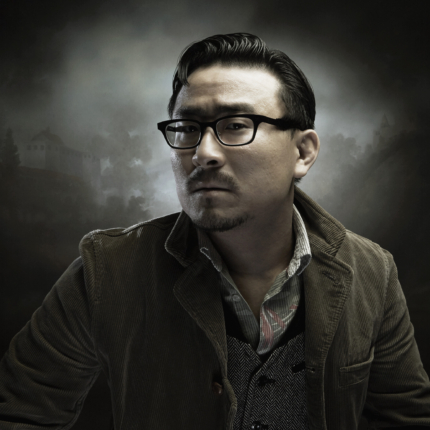